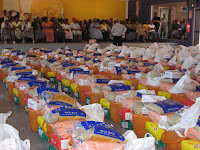 Tuesday, March 24 was World TB Day – a global effort to raise awareness of the high rates of tuberculosis in places like sub-Saharan . There is a direct link between TB and HIV/AIDS and many of the people that Open Arms works with in are suffering from both diseases. Serious co-infections like this make appropriate medical treatment critical to potentially save the life of the person who is ill, and to also prevent the spread of drug-resistant strains of both TB and HIV/AIDS. Of course, medications taken in the absence of food is not an effective course of treatment for any illness.

Here is where Open Arms comes in. The model of care that was started for people with HIV/AIDS in the Twin Cities 23 years ago is proving to be just as helpful for people living with this same disease in today.

Early on the morning of World TB Day, trucks began arriving at the Zwane Community Centre in Guguletu bearing tons of food to be assembled into food parcels and distributed to people living with HIV/AIDS, their home care providers, as well as to the staff and volunteers at the Centre who daily work to provide services to the people of Guguletu. Throughout the day about 20 individuals, including three volunteers from Open Arms in , diligently worked to ensure that the 300 parcels would be ready for pick-up by the middle of the afternoon.

Twenty pound bags of rice, flour and maize were stacked on top of each other. Plastic buckets with lids were filled with beans, pasta, sugar, canned fish, spice, tea and coffee. Frozen chicken – the most popular item in the parcels – were placed in plastic bags. Although it is impossible to determine the difference this single parcel can make, we believe enough food is provided to assist a family of seven for nearly a month. One young man said that he and his wife and child would be eating from the food parcel for the rest of the year.

Open Arms’ first food parcel distribution for members of an HIV/AIDS support group began on World AIDS Day – . That first year, about 100 parcels were provided. The amount of food included in a parcel, along with the number of parcels assembled and distributed, has increased year after year. Open Arms also went from providing parcels once a year on World AIDS Day, to including a second distribution in the spring of each year. Since the program began, Open Arms has sponsored approximately 3,500 food parcels.

Food prices have increased in and the cost of this spring’s program was higher than most years with each parcel costing approximately $43. Open Arms is grateful to all of our donors who sponsored a parcel for a family again this spring. As we heard many times on food parcel day, “Enkosi kakhulu.” Which translated from Xhosa means, “Thank you very much.”