We’d like to introduce you to Sarah Mobry, who joins our staff as the Open Farms Assistant. Help us welcome her! Here’s some information to help us get to know her better. 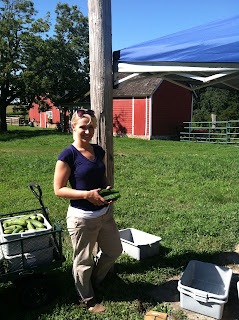 Ben Penner: How did you hear about Open Farms?

Sarah Mobry: I heard about it through your Facebook posting. I was a volunteer driver for Meals on Wheels, and found out about Open Arms through a search for their programs in the Twin Cities after I moved from Rochester.

BP: Where did you grow up?

SM: Anoka. I grew up on a plot of land, about 3.6 acres, so similar to the size of Open Farms! My parents grew food on part of the land while some of it was wild grasses and flowers. It was a mix of fruit trees, native grasses and vegetables.

BP: Living with a garden nearby gave you a love of gardening?

SM: Yes, I used to help my mom every summer – mostly eating what I had picked.

BP: So you kind of knew what you wanted to do?

SM: I have always been kind of a tree-hugger type. I learned to volunteer on farms. My first farm was a squash farm – squash as far as the eye can see.

BP: What was your favorite class in school?

SM: I went to an environmental college, Northland College in Ashland, WI. I took an orienteering class in the winter. Basically they let everyone loose with a compass on snowshoes. It was fantastic. They had a farm, too, with wind power. It was all vegetables and no fruit.

BP: What is your favorite vegetable?

BP: What fun fact would you like everyone to know about you?

SM: I am running the Chicago marathon in October, so that takes up a lot of my time.

BP: Have you ever done a marathon?

SM: I’ve done a half-marathon before.

BP: Do you run every day?

BP: What would you like to learn at the farm?

SM: Most of what I have done has been the sort of grunt-work of the farm at the beginning of the season. I’d like to see how things get wrapped up at the end of the season in the fall. Everyone does everything a little differently, so it will be good to learn a different system and all of the inner workings.

BP: Is there anything else that you would like people to know?

SM: I have a daughter, Amelia. She is four and is a lot of fun. I think the farm is a great place for kids – maybe because that was my experience. I think kids should know where food comes from – they should know what a tomato plant is!
Welcome to Open Farms, Sarah!
PrevPreviousWeekly Recipe #77: Gluten-Free Dairy-Free Zucchini Bread
NextWeekly Recipe #78: Tomato CobblerNext