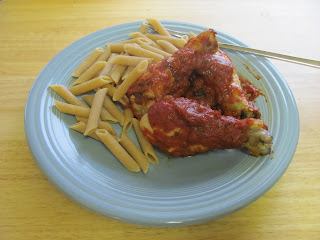 I don’t know when, if ever, I have gone four days without throwing away some leftover food or table scraps. Since starting my SNAP Challenge not a single flake of raisin bran or a bite of scrambled egg has gone into the garbage. That may change, however.

I waited until the weekend to prepare the two entrees that I thought would be the highlights of my week. The first was ground turkey served over pasta with spaghetti sauce. The second was chicken drumsticks served with the exact same pasta and spaghetti sauce. I made both dishes at the same time getting three generous servings out of the ground turkey and two out of the chicken drumsticks. Having more portions of the pasta with turkey, I decided that would be my dinner and, as it was the weekend, I would make the meal a little extra special by melting a slice of American cheese over it.

I should have known when the “imitation” orange-colored cheese didn’t actually melt that the meal might not live up to my expectations. The first couple of bites tasted fine. Not great, but as this was one of my most expensive meals of the week ($1.39 for a pound of ground turkey), I wasn’t about to be put off by the awful aftertaste that followed each swallow. As a boy, I lived on a farm and would often feed our chickens a packaged feed. The ground turkey I was eating had an off-putting smell that I associated with the feed I used to give our chickens. Halfway through the meal I began to wonder if it wasn’t going to make me sick. It didn’t, but the thought of eating this same meal two more times was not appealing.

Fortunately, I had the servings of chicken and pasta all ready to be heated for my lunch today. It never occurred to me that this might actually taste worse than the turkey and pasta, but it did. Something about the spaghetti sauce, combined with inexpensive chicken drumsticks covered with fat and skin, resulted in a meal that was nearly inedible. Being hungry, I ate the entire serving. Five minutes later, in an effort to get rid of the lingering taste in my mouth, I ate one of my six-ounce containers of raspberry yogurt and had half a glass of milk.

Now, I’m faced with a dilemma. I have three leftover servings of turkey and pasta and chicken and pasta and the thought of eating this one more time, let alone for three more meals, makes me sick. I can probably stretch my rice and black beans to three meals. I have one can of vegetable soup and two overripe bananas left in the pantry. That, combined with my remaining eggs, a couple of slices of bread and a whole lot of carrots, should probably get me to Thanksgiving.

I won’t throw my turkey and chicken leftovers away quite yet. In a couple of days, they might look appetizing again. But right now I’m happy to return to a meal consisting only of a peanut butter sandwich and a carrot. If only I had bought a second jar of peanut butter instead of the chicken drumsticks.

Here’s everything you need to know about Yesvember 2022 at Open Arms! November is a magical month for Open Arms of Minnesota. Since 2015, Open Arms has turned NOvember into YESvember for all our clients across Minnesota. We are not only preparing and delivering

Masks Welcomed But Not Required at Open Arms Facilities as of 8/30/2022 As of Tuesday, August 30, masks will be highly encouraged, but optional, in both Open Arms buildings for everyone who is considered fully vaccinated – staff and volunteers. Open Arms has responded