It makes me feel good. 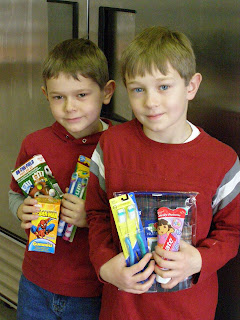 I have very few memories of being in first grade except for an overpowering fear and dislike of my first grade teacher. OK, it was more than dislike. My mother still tells a story about my teacher being out on a medical leave during part of that year, and me praying every night during her absence for my teacher to not return to school. OK, I prayed for her to die. Now, before you get too upset about a seven-year-old boy praying for his teacher to die, please know that to the best of my knowledge my first grade teacher is still alive more than four decades later.

I was in the first grade in 1966. Lyndon Johnson was president. The Civil Rights movement was being played out in the streets, and the Vietnam War was beginning to be played out on our TVs. Being played, that is, if the bunny ears were positioned correctly on top of our black and white television so we could make out the images of Huntley and Brinkley in all of the electronic snow; and if we could hear their nightly news report over all of the static. Television reception in rural in the mid-1960s was hit and miss. Growing up on a farm at that time, long before the information age, shielded me from the knowledge that we were entering one of the most pessimistic and cynical periods in American history.

As a boy on the farm, my days consisted of feeding the chickens and collecting eggs every morning. If I wasn’t in school, I was probably playing in the grove of trees where branches became horses to ride, and discarded doorknobs became telephones with which to call my older sisters as they played in their imaginary house in the woods.

In the first grade, I had no world view. I hardly had a town view since the nearest town had a population of 1,600 people, and I only went there for school, or to go shopping with my parents on Saturday night when the stores stayed open late, or for a haircut. And as anyone in my family can tell you, I always hated getting my hair cut. So, if I behaved in the barber’s chair, my father would give me ten cents after each haircut and take me to the “dime store” to get a toy. (And yes, you really could buy a toy for ten cents in the 60s.) Long before Christmas arrived each year, I would begin dreaming about what gifts, besides underwear, there might be for me beneath the tree. I don’t ever remember hearing about starving children in far-away places, and even if I had, that certainly wouldn’t have motivated me to eat my peas. I mean, when I was seven-years-old, was as foreign to me as any location in .

There are those who see parallels between the 1960s and today. While we pump billions of dollars into a war, we cut funding for education, healthcare, social services, and infrastructure. While a select few get ultrarich, many more feel the burden of an economic downturn. While progress may have been made in civil rights, the dream of human rights – around the world and here at home – is far from realized. And the information age, even in small town , has made it all but impossible to shield children from the issues of the day and the pessimism and cynicism that many people are once again experiencing.

But guess what? The information age isn’t forming young pessimists and cynics. Rather, it’s creating global citizens. At an age when I was dreaming about toys in dime stores and couldn’t point to on a map, some kids today are raising awareness and money for issues like poverty, hunger, and AIDS orphans in far-off places like .

Billy and Jake Straub are two of those kids.

Billy is eight-years-old and in the second grade. His brother Jake is seven and in first grade. The brothers attend a program at their school with Tony Zappa’s nephews. Tony is the Open Arms board member who spent the past year volunteering in . Tony’s brother, Jim, visited and when he returned to the Twin Cities, he talked with students at Billy and Jake’s school about his experiences. Shortly after that, Open Arms sent a request in our weekly e-mail, Free to Dish, asking for donations of children’s underwear and socks to be given to AIDS orphans in Guguletu.

Billy was about to turn eight when the e-mail arrived in his mom’s inbox. The brothers take turns having birthday parties that they invite friends to, so every other year each boy has a big party. Last year, at Jake’s party, Jake requested that his friends bring school supplies for his kindergarten class rather than presents for him. Jake’s teacher was thrilled when Jake showed up with enough markers and glue sticks to make it through the rest of the school year.

This year, it was Billy’s turn to have a birthday party. Remembering the stories he heard at school and hearing his mom talk about the e-mail she received from Open Arms, Billy asked his young guests to give socks and underwear for Open Arms to deliver to AIDS orphans in South African townships. After the party, on a release day from school, Billy and Jake came with their mother to Open Arms and delivered boxes and bags filled with socks and underwear – “Even girl’s underwear!” Jake exclaimed.

When I asked their mom what motivated Billy and Jake to do things like this (and their generous acts are not limited to their school and Open Arms), she was a little embarrassed. Their mom said, “It isn’t as if the boys are making a huge sacrifice to do these things. We are so fortunate to have everything we need.”

That may be, but it would have never crossed my mind when I was seven or eight years old to give up presents so that kids in another part of the world could have socks and underwear – especially underwear. Remember, I hated getting underwear at Christmas!

I can assure Billy and Jake that all of the children who benefited from their efforts in Guguletu were absolutely delighted to receive the presents. For some of these orphans, it was the first time they had ever had underwear.

When Billy and Jake were asked why they are so generous, why they both give up birthday presents, they each said the same thing: “It makes me feel good.”

It should make us all feel good.