IAM What I Am 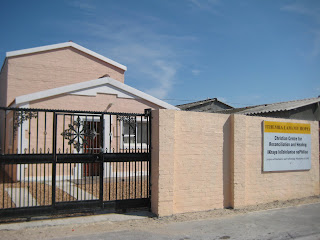 Courage is the trait that I most admire in people. I’m not, by nature, a courageous person. Perhaps that’s why I admire it so much in others.

I draw courage from the people of .

When Laurie Gaum and Judith Kotze, two Dutch Reform ministers in , told me about a project to open a safe house for gay, lesbian, and transgendered people in the , I doubted that it could happen. I make no claim to understanding South Africa – certainly not township culture – but I do know that even in the most supportive of environments it can be challenging to work on GLBT issues. It seemed to me that those challenges are even greater in an area with widespread poverty, unemployment, and rates of HIV/AIDS. But if the challenges are great, so is the need.

What Pieter Oberholzer, founder and director of Inclusive and Affirming Ministries (IAM), along with people like Judith and Laurie, realized was that the discrimination and prejudice that gay people around the world have experienced is exacerbated in a township setting when “combined with religious fundamentalism, negative beliefs, and apathy of pastors and the clergy.” The lack of social services, resources, and support, specifically for GLBT people in the townships, makes them even more vulnerable to persecution and violence.

Judith and Laurie told me stories of gays and lesbians being kicked out of their homes by families who didn’t understand and couldn’t accept their children’s sexual orientation. They talked of gay men being harassed and beaten, of lesbians being raped. As much as we would like to believe that there is always help available for people who need it, sometimes there is no sanctuary – until courageous people come along.

Pieter Oberholzer and his colleagues at IAM did not accept the conditions in the townships. They realized that GLBT people need a safe place to go for a limited period of time to get off the streets, to attempt to reconcile with their families, to have the support of other gays and lesbians in the townships. Their response to this very complex issue, really a cultural taboo, was to establish the first of its kind GLBT safe house in the townships outside of . But as we all know, few neighborhoods warmly embrace facilities like this one into their communities and resources for any project, especially one that has never been done before, don’t just materialize. For this courageous group to be successful with this project they would need to find someone from the townships, a person who spoke Xhosa, who understood community organizing, and who was willing to advocate for gays and lesbians. Any person who could get a neighborhood in the to support locating a GLBT safe house there would, it goes without saying, also have to be courageous.

Yvonne Daki is courageous. Yvonne works part-time at the Zwane Community Centre in Guguletu coordinating Zwane’s response to the increasing numbers of AIDS orphans and child-headed households. During the struggle against apartheid, Yvonne and her family were very involved with the ANC (African National Congress) and it was through the ANC that Yvonne learned grassroots organizing. Canvassing the neighborhood would be critical to the actual realization of the safe house, but Yvonne possesses an even more valuable asset – perhaps also learned during the apartheid years – she is inclusive.

Yvonne agreed to assist IAM in their efforts by going door to door, street by street, talking to neighbors about what the safe house would provide, who would use it, and why it was important. Initially, some thought the safe house would be a gay shebeen (a bar) but because of Yvonne’s credibility and her dogged determination to dispel rumors and breakdown stereotypes – now not based on race as her earlier work with the ANC had been, but based on sexual orientation – Yvonne won over the community and iThemba Lam was opened.

iThemba Lam, Xhosa for “My Hope,” is a small two-story house in the Oliver Tambo section of Guguletu. It has a living room at the front of the house which serves as the meeting space for the GLBT support group. There is a small office on the first floor and two bedrooms and a kitchen upstairs. The furnishings are sparse, but for someone whose coming out has resulted in them being kicked out of their home, iThemba Lam offers more than a temporary sanctuary. It really does offer hope.

Judith Kotze of Inclusive and Affirming Ministries says, “Homosexuality is an issue that can’t compete with poverty and AIDS, but if people can find a way to be with this issue, they will be better experienced to deal with all issues of diversity.”

iThemba Lam is a fledgling project in need of a sponsor. In addition to providing temporary housing for GLBT people, iThemba Lam’s founders dream of having counselors on staff to assist gays and lesbians in reconciling with their families and their faith communities. They want to facilitate training on counseling, leadership, self-awareness, and caring so more people can be educated on GLBT issues and provide greater services within the townships. They hope to incorporate a resource library of books, articles, and magazines that GLBT people in the townships might otherwise never have access to.

iThemba Lam and Inclusive and Affirming Ministries are courageous projects run by courageous people. This kind of courage needs to be supported.